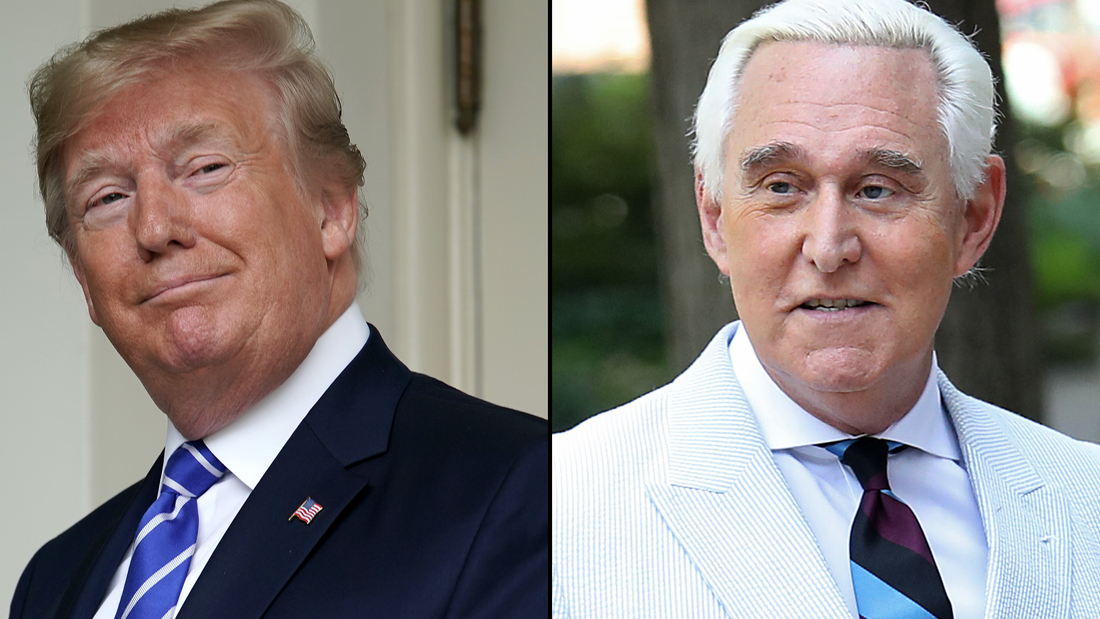 Asked by reporters at the White House about the possibility that he would pardon Stone, who was sentenced last week to 40 months in prison, Trump said, “That juror is so biased and so tainted, that shouldn’t happen in our criminal justice system.”
“You have a juror that is obviously tainted. She was an activist against Trump. She said bad things about Trump and bad things about Stone,” the President claimed without evidence. “She somehow weaseled her way onto the jury and if that’s not a tainted jury then there is no such thing as a tainted jury.”
The President’s comments this week follow Stone’s attempts to raise doubts about his conviction. In recent days, he has sought a new trial and asked the judge to remove herself from his case.
Both of these types of requests often don’t succeed in court, but they have allowed Trump to continue to question Stone’s trial publicly, where a jury in Washington unanimously found Stone guilty on seven counts that revolved around him protecting the President.
Stone legally has the ability to raise challenges about his trial after his sentencing, and his team has made clear they may seek appeals while his friends have lobbied for a presidential pardon.
Stone was convicted last fall of lying to Congress and threatening a witness regarding his efforts for Trump’s 2016 campaign to reach WikiLeaks about politically damaging information the group received from the Russians about Hillary Clinton.
The President attacked the forewoman multiple times this past week, alleging that she was biased and led to a tainted jury.
Tomeka Hart has been identified as the juror in question. The court has not released Hart’s name, or an initial juror screening questionnaire she filled out, but her bio matches the questioning of juror 1261, who acknowledged to the court during the trial’s first day in November that she ran for Congress and lived in Tennessee.
Hart publicly revealed herself to be the Stone jury forewoman last week in a post on social media.
Stone’s defense team did not attempt to challenge juror 1261 from serving on the jury at the time. Hart told the judge and lawyers for both sides that she could be impartial.
But it’s still not known what Hart told the court, when asked in a written questionnaire her opinion of Trump, who was mentioned at trial. Stone, in his ask for a new trial, alleges a juror misled the court “regarding her ability to be unbiased and fair and the juror attempted to cover up evidence that would directly contradict her false claims of impartiality,” according to a filing he made Friday night.
After Hart publicly identified herself as a juror forewoman, Stone’s supporters attacked her for negative social media posts she made about Trump and his backers before the trial.
Hart was one of the 12 jurors chosen after neither side objected to her. According to a court transcript of the jury selection process, Hart acknowledged having a social media presence and knowing that Stone was involved in the Trump campaign and possibly connected with the Russia investigation.
The presiding judge in the case, Amy Berman Jackson, asked directly: “Is there anything about that that affects your ability to judge him fairly and impartially sitting here right now in this courtroom?” Hart replied: “Absolutely not.”
The judge followed up: “Can you kind of wipe the slate clean and learn what you need to learn in this case from the evidence presented in the courtroom and no other source?” Hart replied: “Yes.”

A woman was arrested after licking $1800 worth of grocery store items, police say – CNN