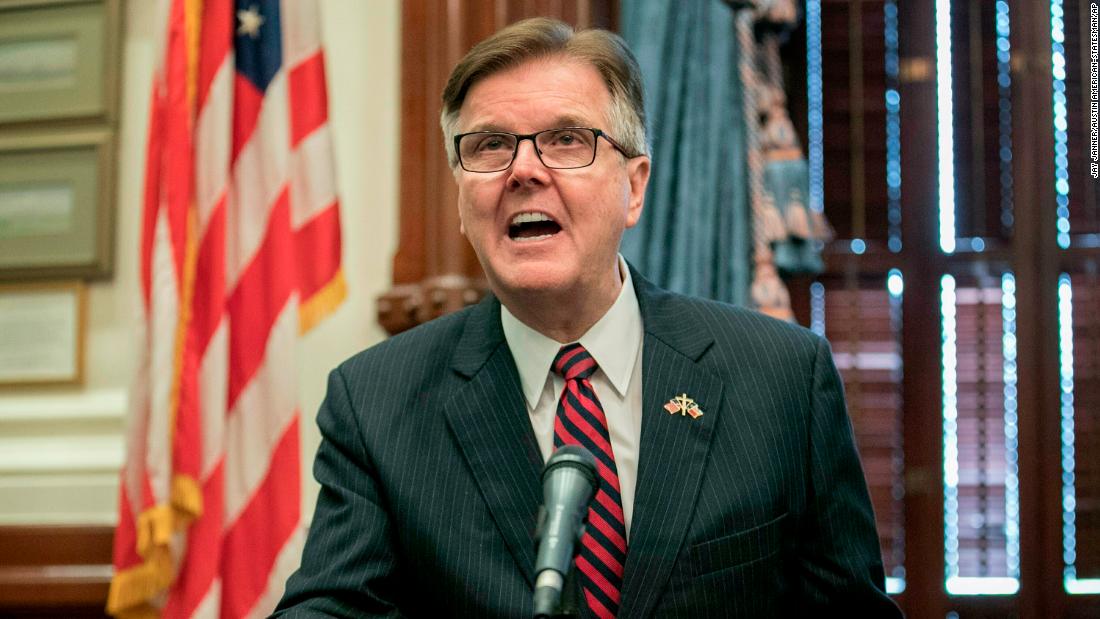 Patrick, who has been lieutenant governor since 2015, has a history of polarizing rhetoric. A provocative conservative radio talk show host before he ran for office, Patrick has backed policies ranging from requiring people to use restrooms that match their assigned genders to the building of a wall along the US-Mexico border.
“He was Tea Party before the Tea Party even really existed,” said Mark Jones, a political science professor at Rice University in Houston.
Patrick’s latest stirring came Monday, when he made comments that people should head back to work, even as officials nationwide shut down businesses in an attempt to slow the spread of coronavirus.
“My message is that let’s get back to work, let’s get back to living. Let’s be smart about it, and those of us who are 70-plus, we’ll take care of ourselves, but don’t sacrifice the country,” he told Fox News’ Tucker Carlson.
In comments that echoed a growing desire among some Republicans, including President Donald Trump, to ease emergency guidelines, he suggested that he was willing to “take a chance” to get the economy rolling.
“What I’m living in fear of is what’s happening to this country,” Patrick, who is about to turn 70, said. “And you know, Tucker, no one reached out to me and said as a senior citizen, are you willing to take a chance on your survival in exchange for keeping the America that all America loves for your children and grandchildren? And if that’s the exchange, I’m all in.”
The comments on coronavirus and the economy, Jones said, were “a little over the top, even for Dan Patrick.”

Patrick’s career began in sports broadcast in the 1970s. He then became a restaurateur in the 1980s and went bankrupt, eventually leading to his time as a provocative conservative radio talk show host.
Patrick’s radio show was an early outlet for Rush Limbaugh before Limbaugh became one of the most prominent political radio hosts in the nation, Jones said.
“I loved this little old station, and a guy named Rush Limbaugh called one day. I can detect a good, conservative voice when I hear it, so I put Rush on the radio in ’88,” Patrick told State Legislatures magazine in 2016.
Once, in August 1991, Patrick underwent a vasectomy live on his radio show, broadcasting from his urologist’s office to encourage other men to consider the procedure, according to United Press International. Patrick’s wife watched the procedure.
When he first ran for office in 2006, the Texas Observer called Patrick “Houston’s king of right-wing talk radio” and reported that he was one to beat in a four-person Republican primary for a Texas Senate seat.
Patrick went on to handily win the primary and the seat itself in the general. He then served in the state Senate for eight years.
While in the state Senate, Patrick proposed a bill that would have restricted Transportation Security Administration pat-downs and “made it illegal for anyone conducting searches to touch private parts under or through clothing,” according to local television station KHOU. The bill failed in 2011 after federal officials warned they would have to cancel flights in and out of Texas airports due to security concerns, KHOU reported.
Patrick was asked about the bill by CNN’s Don Lemon at the time.
“Thomas Jefferson was very clear. He said resistance to government is so valuable on certain occasions he wishes that it always be kept alive,” he told Lemon. “Well, it’s being kept alive on this occasion because this is important that we speak up and say to the federal government, ‘You just can’t pass any rule that you want and expect the American public to take it.'”

Patrick spent much of time in the state Senate talking about ways to lower taxes. Before running for office, he was a founder of a group called Citizens Lowering Our Unfair Taxes that organized thousands of people in an effort to lower property taxes.
In 2002, Patrick published the book, “The Second Most Important Book You Will Ever Read: a Personal Challenge to Read the Bible.” He later authored a bill that got the words, “In God We Trust” displayed in the Senate chamber.
Later, when Patrick ran for lieutenant governor 2014, he framed his campaign around slowing immigration and controlling the border. Patrick has likened immigration into Texas to an invasion, and accused immigrants of bringing diseases.
“Dan Patrick was Donald Trump before Donald Trump was,” said Brandon Rottinghaus, a professor of political science at the University of Houston.
Patrick defeated the three-time incumbent in the GOP primary and won an easy general election victory.
As lieutenant governor, he has backed a series of controversial policies. He was a leading proponent of the 2017 Texas “bathroom bill.” The bill did not become law, but would have required people to use school restrooms and facilities that match the gender on their birth certificates. It was opposed by transgender advocates and major Texas companies.
Patrick has also backed Trump’s wall on the US-Mexico border.
Rottinghaus said Patrick is “by nature a political bomb thrower.”
He compared Patrick to Trump: “The stylistic similarities are pretty strong, and the political similarities in some ways are identical.”
That parallel has been on display as Patrick campaigns for Trump’s re-election.
“We did not have an election in 2016. We had a revolt!” Patrick said when introducing Trump at a rally last year in Dallas, according to Texas Monthly. “And this is what the media doesn’t understand, or the progressive left. The revolution is only getting louder and larger!”

Coughing tiger at the Bronx Zoo tests positive for coronavirus, ‘first case of its kind’ in U.S. – The Washington Post